EverString announced a $65 million funding round and new ad targeting product on Tuesday. (It also released a new survey on predictive marketing which is probably interesting, but I just can’t face after last weekend’s data binge.)

The new funding is certainly impressive, although the record for a B2B predictive marketing vendor is apparently InsideSales’ $100 million Series C in April 2014.  It confirms that EverString has become a leader in the field despite its relatively late entry. 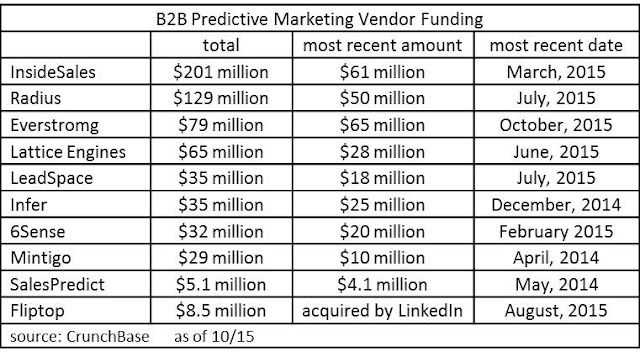 But the new product is what’s really intriguing. Integration between marketing and advertising technologies has now gone from astute prediction to overused cliché, so nobody gets credit for creating another example. But the new EverString product isn’t the usual sharing of a prospect list with an ad platform, as in display retargeting, Facebook Custom Audiences, or LinkedIn Lead Accelerator. Rather, it finds prospects who are not yet on the marketer’s own list by scanning ad exchanges for promising individuals. More precisely, it puts a tag on the client’s Web site to capture visitor behavior, combines this with the client’s CRM data and EverString’s own data, and then builds a predictive model to find prospects who are similar to the most engaged current customers.  This is a form of lookalike modeling — something that was separately mentioned to me twice this week (both times by big marketing cloud vendors), earning it the coveted Use Case of the Week Award.

Once the prospects are ranked, EverString lets users define the number of new prospects they want and set up real time bidding campaigns with the usual bells and whistles including total and daily budgets and frequency caps per individual.  EverString doesn’t identify the prospects by name, but it does figure out their employer and track their behaviors over time. If this all rings a bell, you’re on the right track: yes, EverString has created its very own combined Data Management Platform / Demand Side Platform and is using it build and target audience profiles.

In some ways, this isn’t such a huge leap: EverString and several other predictive marketing vendors have long assembled large databases of company and/or individual profiles. These were typically sourced from public information such as Web sites, job postings, and social media. Some vendors also added intent data based on visits to a network of publisher Web sites, but those networks capture a small share of total Web activity. Building a true DMP/DSP with access to the full range of ad exchange traffic is a major step beyond previous efforts. It puts EverString in competition with new sets of players, including the big marketing clouds, several of which have their own DMPs; the big data compilers; and ad targeting giants such LinkedIn, Google, and Facebook. Of course, the most direct competitors would be account based marketing vendors including Demandbase, Terminus, Azalead, Engagio, and Vendemore. While we’re at it, we could throw in the mix other DMP/DSPs such as RocketFuel, Turn, and IgnitionOne.

At this point, your inner business strategist may be wondering if EverString has bitten off more than it can chew or committed the cardinal sin of losing focus. That may turn out to be the case, but the company does have an internal logic guiding its decisions. Specifically, it sees itself as leveraging its core competency in B2B prospect modeling, by using the same models for multiple tasks including lead scoring, new prospect identification, and, now, ad targeting. Moreover, it sees these applications reinforcing each other by sharing the data they create: for example, the ad targeting becomes more effective when it can use information that lead scoring has gathered about who ultimately becomes a customer.

From a more mundane perspective, limiting its focus to B2B prospect management lets EverString concentrate its own marketing and sales efforts on a specific set of buyers, even as it slowly expands the range of problems it can help those buyers to solve. So there is considerably more going on here than a hammer looking for something new to nail.

Speaking of unrelated topics*, the EverString funding follows quickly on the heels of another large investment  – $58 million – in automated testing and personalization vendor Optimizely, which itself followed Oracle’s acquisition of Optimizely competitor Maxymiser. I’ve never thought of predictive modeling and testing as having much to do with each other, although both do use advanced analytics. But now that they’re both in the news at the same time, I’m wondering if there might be some deeper connection. After all, both are concerned with predicting behavior and, ultimately, with choosing the right treatment for each individual. This suggests that cross-pollination could result in a useful hybrid – perhaps testing techniques could help evolve campaign structures that use predictive modeling to select messages at each step. It’s a half-baked notion but does address automated campaign design, which I see as the next grand challenge for the combined martech/adtech (=madtech) industry. On a less exalted level, I suspect that automated testing and predictive modeling can be combined to give better results in their current applications than either by itself. So I’ll be keeping an eye out for that type of integration. Let me know if you spot any.

The Recipe for Innovation Success